re: A Link to the Past’s status

Retronauts: 1UP’s Classic Gaming Blog : How is Zelda: A Link to the Past Different From (and Better Than) Its Sequels?.

That Parish guy gets it. I’ve liked him ever since he ran a site called Toasty Frog, before blogs were known as blogs. It’s always comforting to find some of our opinions are still in line.

Tags: 1up, A Link to the Past, The Legend of Zelda, video games, Zelda

You never forget your first quest

Before I get to what I thought of Nintendo’s last huge release of 2011, a little context might help to understand how I view the series of The Legend of Zelda as a whole. The first three games my family had for the Nintendo Entertainment System were (of course) Super Mario Bros./Duck Hunt, Lifeforce, and The Legend of Zelda. At the time Zelda was too daunting for five year-old me, but it was an amazing game to watch my brother and Papa play. I remember borrowing Zelda II: The Adventure of Link from a friend and being confused by the change in game play but impressed nonetheless with the world it created. Then I rented and played through The Legend of Zelda: A Link to the Past, which became one of my favorite games of all time. I’ve owned, played, and loved just about every proper Zelda game since then (yes, I’m excluding the Phillips CD-I games as well as the LCD handhelds) – and I literally received The Minish Cap in the mail last Saturday. The Zelda series represents to me what video games can be when enough thought are put into them. Ultimately, Zelda games are puzzles requiring the player figure out almost everything, from effective combat strategies to advancement in mazes. There’s a lot of thoughtfulness and mindfulness going on. The least appealing factor about the series is its reliance on its own tropes, primarily the “Received New Item, No Longer Need to Think about How to Move Forward in the Dungeon” trope. Yeah, when you get the whip, that will make the rest of the dungeon easier and you now know what to use on the boss. Regardless, it’s difficult for me to not appreciate the earnestness with which they deliver that trope. The designers want players to constantly feel like they are mastering the games.

Of course I picked up Skyward Sword as soon as it was made available, or at least as soon as my pre-order arrived in the mail three days after its availability in stores. So eager was I to play that I did not even bother to wait until the next day to pop the disc in and go, despite the fact that my pupils were still dilated from that afternoon’s eye exam. It was Zelda time, and I needed to experience the new addition to its world. Skyward Sword didn’t disappoint in the areas where it needed to remain strong, and it brought new experiences to the table. END_OF_DOCUMENT_TOKEN_TO_BE_REPLACED 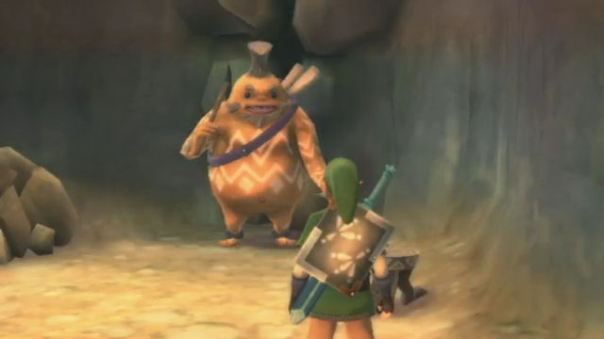 I made the mistake of silently mocking Skyrimmers because while I believe the game may be as great as they perceive it to be, it’s full of bugs and glitches. I think a game that needs to be patched to be completely playable is not a game that should be released into the wild. Well, at least Skyrim was released on systems that could receive patches.

Reading the news of Skyward Sword‘s bug was tremendously disappointing, despite its being very fortunate for me. I read it immediately after reaching the point where it would matter to me. I honestly considered heading to the location of the Thunder Dragon first. Anyway, this means that the game is kind of a failure in my mind. Who wouldn’t QC the only point in the game (so far) where the player can honestly choose Link’s path? This is mind-bogglingly disappointing.

Worse yet, this is the second Legend of Zelda game on the Wii to feature a game stopping bug! I’m quite well known as a Nintendo sympathizer, but this falls outside of my ability to minimize. Zelda is one of Nintendo’s biggest names. It doesn’t make sense to not make sure it’s perfect.